Fatsack was started by Doug Udell and Rob Stimpson and Craig Rit* around 1992. Rob and Doug went to the same high school and Rob played in Doug's band Naked America in Port Huron. Doug moved to Kalamazoo after their sophmore year (Doug went to school in their hometown). Rob met Craig Rit at PIRGIM, Ralph Nader's environmental group, and was impressed with the size of his drums. Rob and Craig started jamming at Black Spring's spot (Rob had no bass amp), a photo studio in the same complex as the future Bell's brewery. Rob and Craig continued and Craig's roommate, Tommy Shannon, proposed an idea of them forming a group with Mike Hard called Uncle Willy. Fell through. Rob eventually got his own amp, and they started practicing with Doug at the old house of Farrow's music. 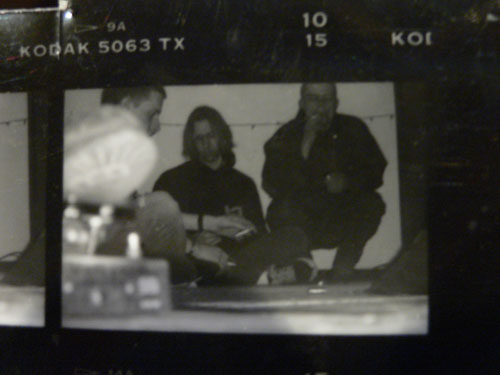 Practicing amongst Twitch, TI, and others did little for their ability, but Rob and Doug were able to coax spectacular performances from their behemoth drummer and earn the status of Side Project. Tom Zurawski, a local badass, ex football runningback, artist, and the best looking front man in K'zoo was recruited and they had their first show opening for the Laughing Hyenas in Ann Arbor . Recorded a tape with Richard something at his barn in the country by Chris Remy and his brother. Members were added: Jason Vought from Tom's hometown on vocals, Todd Carter on samples (of current recording artist TV Pow) Chris Remy guitar (Resin Mattress) and Squirrel and Simosky, bowl passers (and pantry raiders upon home visits) plus myriad other characters.

Tom eventually quit to move to Chicago to pursue design and Doug took over on vocals. Recorded another tape with Chris at his house called 'Down on the Pharm". Chris was unceremoniously booted from the band over the phone, which pissed him off bad. Thus they were down to three. Then more recording . Mike Shure did the Olde Miami single in his basement studio on west Main , along with the Sexplosive B track. Of note, Rob used Sarah Halsey's bass on this recording cause his was a piece of shit meant for feedback. Doug did use his piece of shit guitar meant for feedback, however.Was released on Anti Music in 1994. Sexplosive B was cooler than just about all K'zoo bands.

Also, Todd Carter was at Western Sound Studios and told them about free time for bands cause engineers needed bands to record. Recorded a lot. A second 7"ą was released, containing 4 Fatsack songs and a track by Rob called Ground Zero. Got favorable reviews in Maximum Rock N Roll and Flipside. Still weren't invited to Kalapalooza, so we played Jeremy Kitchen's Kalapaloozer. Played a lot of shows: St Andrews in Detroit , once in the ballroom on the third floor, once opening for the Cows in the main theater. Played the Olde Miami lots of times - headquaters of Anti Music at the time. Last great show was opening for Mule at Club Soda. We were on a video for a band we opened for called Cum Dumpster. Worse name than ours. We'd love a copy, though. Doug knows more of the bands we played with. Leaving Trains was cool. Also, Morsel - opened for them several times - cool band. Lots of basement shows, like the couch house:

Rob had gotten a spinal tap cause they thought he had spinal meningitis. Terrible headaches, so he had to be fed mary jane by Simoski for most of the show. The fourth member of the band became the Morley ECV pedal. A wonder of mondern electronics, it allowed Doug to set his guitar down in front of the amp and play the pedal. Kept his hands free to jingle change in his pocket. Also, Doug would like to make it clear than Grand Rapids still sucks worse than Kalamazoo . Fuck the Intersection.