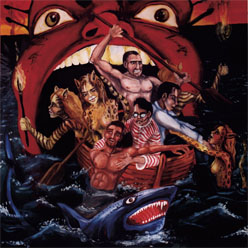 The Hudson Debacle is a four peice rock ensemble playing fun and accessible college rock with a few twists and turns here and there. The Hudson Debacle formed in 2000, starting with ex-Kzooites Jeff Till and D. Austin (Dave) Nash. Politician/scientist Chris Beck and Cosmology Xavier Seimens rounded out the mix. All members joined based on their friendship and as a hobby moreso than any particular musical vision or ambition.

The Hudson Debacle played eight or so shows in the Boston area, strangely being able to get gigs at the right places in an otherwise tight, competitive scene. The Debacle recorded and released two full length CDs: Rockmen to a Far Away Nowhere (2001) and Return of the Rockmen: Into the Monkey Oven (2002). Despite, or because of, these efforts, the Hudson Debacle garnered few fans outside the participants themselves. The Debacle disbanded in 2003 when Chris moved to DC to work for Congress and Xavier left the state to further pursue his physics career. 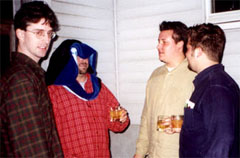 THE HUDSON DEBACLE: ROCKMEN TO A FAR AWAY NOWHERE