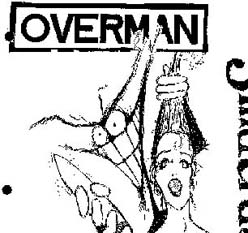 The three-peice, pop-punk trio OVERMAN were formed in 1990 and debuted at a self-thrown New Years Eve party at the EAT house on Academy Street. They publicly debuted the next night at Club Soda. Overman was formed by bassist/songwriter/singer Jef Till and drummer Craig Verity after they disbanded the short-lived and unpopular band CRY. Jeff and Craig found guitarist Matt Sahlgren while being drunk and funny at an FAQ state theatre show.

The music style was melodic punk rock, later moving to a more quirky style as the band matured. Through their breif showing, they played a couple dozen shows around the state (mostly in Kalamazoo), wrote and performed 28 songs, played a couple out of state dates with FAQ, and had the priveledge of opening for NOMEANSNO, the bands' favorite band at the time. Overman also were the first band within the clique to play Harvey's on the Mall and Missiah's working man's saloon.

Overman's only recording effort was a nine-song demo tape that was self released, DIY-style by dubbing tapes. About 18 songs total were recorded and Dano's semi-pro studio. Remarkably, over 200 copies sold. Jeff Till released a longer version of the demo (available below) in 2003, updating the previously poorly recorded guitar tone and poor vocal performance.

Overman broke up in early 1992 to form the much more quirky and technical Screwtape. 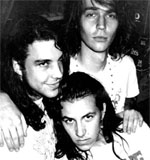