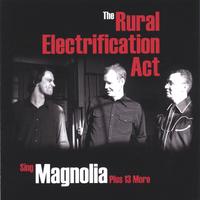 I just thought I would give you a little back ground on REA and how they came to be. I meet Sahlgren and Gregor during their Monster Zero days when I used to hang out at Flipside Records around 93' or 94' (It's all a big blur back then). I played in a band that never went anywhere called Grindcore Abortion which consisted of myself and Matt Dorbin of Goat. We used to practice at Flipside after they would close. After Grindcore dissolved I went on to play in a post new wave band called Madison Electric and we played a few shows around town mostly at a coffee shop on campus (Soul Coffee I think?) That band consisted of Josh Garman (Earth Dies Screaming and Crash City Saints), Nathan Garman (Earth Dies Screaming, Crash City Saints and The Hex Bombs) and Michelle Weir. Sahlgren got Madison Electric an opening slot for Greiver Sauliks which consisted of Tony Gregor, Matt Sahlgren,Steve Versaw and Robert Hicks (Both Versaw and Hicks went on to form the M's out of Chicago). After the Griever Show Madison Electric melted down and I took a couple of years off from music. I picked up a couple of Guitars and started teaching myself to play and around 1999 I formed the Crash City Saints with Nathan Garman, Mike Mann (The Hex Bombs) and Kevin Trevarrow. Josh Garman join the band a few months later. We replaced Mike Mann with Matt Sahlgren and we actually started getting better and developed a following but the drummer decided he liked my girlfriend and that ended that. Sahlgren and I tried to replace Trevarrow with Craig Verity but the other guys wanted to stick with Trevarrow so Sahlgren and I left the band. In 2001 Sahlgren, Gregor and I started playing every now and then and I joined a new wave punk outfit called Melt which consisted of Jason and Heather Jach, Dave Jacobs and Sam Francis (Night Moves and The Pressure) and we put out a CD and played a lot of shows around Michigan. Around 2003 Sahlgren, Gregor and I decided to start playing out and formed the Rural Electrification Act. Shortly after that we started recording with Martin Klemm and put out "Sing Magnolia plus 13 more". I left Melt in late 2003 because I was having more fun in REA. Things changed for REA in 2005, Gregor's ex-wife decided to move to Louisville, KY with their daughter so he moved there to stay close to her and the Sahlgren's were expecting their first bundle of joy. Matt and I didn't want to continue without Gregor anyway so we broke up. Gregor now lives in Elgin, IL with his girlfriend and Sahlgren and I both are still here in Kzoo. If you want to use any of this on your site go ahead or more info let me know. I have some REA cd's here if you want one so you can post all of the songs on your site plus a couple of live cd's that were recorded at Kraftbrau. I also have some Griever Sauliks Demo's floating around here somewhere as well. If you're interested in any of it let me know.

Here's what's mostly a re-paste from their CDBaby page...

Two of three principle players in this story, Sahlgren and Gregor, met toiling in the bins of the last good vinyl record retail establishment in Kalamazoo. Joining forces, they kicked around the midwest blowing minds and amplifiers in various musical endeavors, and a great many adventures unfolded in that time but, alas, their paths soon forked. Jaded, heartbroken, and destitiute, they parted ways to explore more esoteric paths.

Some five years were spent randomly pursuing knowledge and life experience in the varied realms of country and folk music, noise pollution, elven mysticysm, outsider art, and deviant (political) intercourse. This produced a myriad of unique insights and experiences that left both of them more lost than ever before, unfulfilled and morally bankrupt. During Sahlgren's many travels and travails he met a strange little man named Chris Kolo who'd been playing drums and guitar in a grande variety of punk and cover outfits for beer, coin and enchiladas over the years. They were brought together to round out a synth-punk band that was obviously destined to fail from the get go. This band imploded around a bizarre yet entirely predictable love-quad-rangle, a bottle of home-made absinthe, a set of cymbals, and a complete collection of original Star Wars bubble-gum cards from the late `70s (really awesome). For six long months a quiet, grey calm settled over the Great Kalamazoo Valley, broken only by whispers in winter cigarette sessions and wistful lamentations for a defunct and fondly remembered drinking establishment. Michigan, in the early months of the year, often carries an oppresive air of blight with its wind. Boredom and restlessness and a hunger for sentiments almost forgotten come to the fore. It was because of this malaise that Gregor called Sahlgren, Sahlgren called Kolo, and Kolo got drunk with Gregor. Reinvigorated, the three united to pursue a mutual love of loud guitars, cranked up tube amplifiers and good lyrics. They are The Rural Electrification Act: endowed with the spirit of early `80s American punk and indie-rock, the pop glory of the `60s British invasion, and a deep reverence for early country and hillbilly songwriting. They persevere and thrive in an American Midwest populated by stoned-out jam bands, poseur punks, and rap-metal acts that seem more interested in how they look than producing quality music. The boys in the R.E.A. know that life is too short to put on airs and write bad songs. These guys care. These guys rock.

The REA sing Magnolia and 13 Others

HEY! This is still for sale, so while we'll post a couple to whet your appetite, you should really buy the CD at CDBABY.com